And Another Palin Scandal Coming - An Affair?

Via the Telegraph, all of the sudden they want to talk about the issues:

“Senator McCain and Governor Palin look forward to discussing the issues that Americans care about, fixing broken government, creating jobs, making our country energy independent and securing the peace for the next generation by bringing the wars in Iraq and Afghanistan to a victorious end,” Mr Schmidt continued.

After spending the entire "meet some Alaskan lady who ain't what she says she is" evening attacking community organizers, the average American kind of person trying to help others in thousands of little people ways, and as a back handed attack on Barrack Obama's previous works, and instead of concentrating on defining their positions on real issues... Now, all of a sudden they want to talk about the issues?

Via the AP, and I know this may shock some of you - the McCain campaign is so shocked they are threatening to sue the National Enquirer - but it appears that adultery may run in the Palin family:

The National Enquirer wrote in its edition dated Sept. 15 that Palin had an affair with a business associate of her husband, Todd Palin. He discovered the infidelity and dissolved the business, the article said. It attributed the allegation only to "an enemy" of the Alaska governor.

No need to wonder why the sudden change of direction from the misfiring McCain-Palin for Alaskan Independence ticket...

“The National Enquirer's coverage of a vicious war within Sarah Palin's extended family includes several newsworthy revelations, including the resulting incredible charge of an affair plus details of family strife when the Governor's daughter revealed her pregnancy.

“Following our John Edwards exclusives, our political reporting has obviously proven to be more detail-oriented than the McCain campaign's vetting process. Despite the McCain camp's attempts to control press coverage they find unfavorable, The Enquirer will continue to pursue news on both sides of the political spectrum."

Now this is the funny thing here that doesn't make much sense at all - and I credit my wife for noticing this before I did - Why the hell is the McCain campaign threatening legal action? Neither McCain nor his campaign should have any legal standing here. Shouldn't Sarah Palin be the one doing that? Unless she knows she would lose... 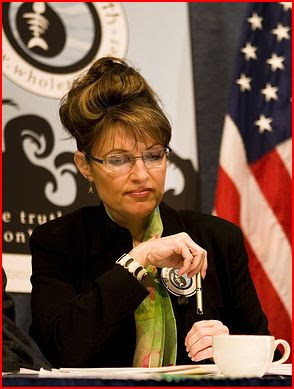 I have this feeling the National Enquirer featuring the scandalized Sarah Palin will fly off the shelves in the next little while.

The ENQUIRER has also learned that Palin’s family is embroiled in a vicious war that is now exposing her darkest secrets, threatening to destroy her political career.

Palin’s ongoing war with her ex brother-in-law Mike Wooten, a state trooper, has caused multiple sources to come forward with shocking allegations about the governor.

Details of those allegations, the family feud, and Palin’s attempt to cover up her teen daughter’s pregnancy are in the new issue of The ENQUIRER.

At this point in time I am beginning to wonder if the GOP should forget about just bringing in a new VP candidate to replace Sarah million and one scandals Palin and yank their endorsement of John McCain entirely.

Because John McCain really blew it big time when he picked Palin.

Side Note: After putting so much effort into building up the National Enquirer's credibility during the John Edwards scandal it should be interesting to watch the right wing try and tear them down as a source this time. 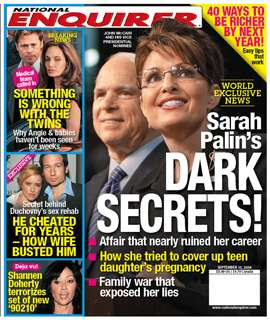 [update deux] Via the Alaska Blog Mudflats... The shit is really gonna hit the fan across the media:

The latest story the National Enquirer is working on is that Palin had an affair with Todd’s ex-business partner in an Anchorage Car Wash venture. This was an interesting twist because it was also rumored that Todd Palin had an “Edwards problem”. Maybe he has an Elizabeth Edwards problem. I generally try to resist getting too caught up in the smarminess, unless it becomes impossible. It just did.

Two days ago, Todd’s ex-business partner filed an emergency motion to have his divorce papers sealed. Yesterday the motion was DENIED.

A local Palmer politician and...
A hockey coach? (see update below)

You just can't make stuff like this up! lol

[update trois] A welcome to Buzzflash readers: and a reminder of the many great services they provide to the Blogosphere:

And a friendly note to Friendly Bear at the TulsaNow Forum: I am an unaffiliated little "i" indie and, YES, I support Obama. Big whoop! Just a liberal with those frickin' pesky liberal facts. Other than being among the millions of Obama supporters there is no connection to any political party, news agency or campaign. But seriously, WTF? Did you think the GOP would be pumping this stuff out like they did with the Enquirers stories on Edwards? You will be waiting forever an a day for them to write on this. And please note the AP and Telegraph sources as well. Unlike the ludicrous GOP talking point brigade, I waited for multiple sourcing before I Blogged on this.

[update quatre] Right now there are all kinds of rumors floating around... While there is the original rumor of a guy named Brad Hanson as the lover, there is also a guy named Richter that shares a property with the Palins and that wanted to get his divorce papers sealed, and another former business partner named Ray Wells...

From what I have read about the Palins so far... I wouldn't be surprised if it turned out they were swingers! lol And it is fun to watch republicans squirm over this.

This is great! Keep us posted!

The name of the "other man" is already bouncing around the internet in rumors, but I figure that I will wait for real sources to confirm it. Besides, unless he goes on record to deny or confirm it... I am not thinking he deserves to be a part of the story anymore than Bristol Palin deserves to be a part of the failures and scandals of Sarah Palin anymore than she has already been. I may rethink that IF they keep parading her and her boyfriend around.

The "other man" actually filed an emergency request to have his divorce proceedings sealed and apparently, that case was dismissed.

Thanks phillybits... I already caught that at the Alaskan Blog "Mudflats"

In the tradition of the great soaps like Dallas and The Sopranos, I propose a new one called Alaska. About a governor who is involved in all kinds of scandals from abuse of power to adultery. It would get such high ratings. What? The episodes are already running? Silly me.

I hope that chick blows up in McCain's face. I never will ever say or write a bad thing about Hillary again.

And I thought I would never buy a National Enquirer!

Hockey Coach?!?! That establishes her as a more dedicated hockey mom than was previously thought -- gotta make sure junior gets his minutes! lol...

I want to get the Enquirer to read the story and see who it is and what proof they have.