As Connecticut's left, and particularly ctbblogger at HatCityBlog, celebrates the downfall of one idiotic bigot known as the Big Turd, there is a possibility of hate crime charges being not too far off on the horizon against members of a group known as “K Nation” in Plainfield, Connecticut: 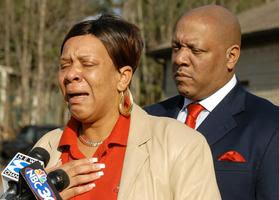 Phyllisha Williams of Moosup crys Wednesday, November 14, 2007 while recounting the alleged racial slurs and beating of her son, Nashawn Williams, a sophomore at Plainfield High School during a press conference at the Plainfield Police station. Behind her is Scot X. Esdaile, Connecticut State Comference of NAACP Branches president.

"At no time has the victim's family, or anyone representing the victim, contacted the police department to complain of inadequate service," Hoffman wrote. "Had the department been made aware of Williams' concerns, the matter would have been investigated despite the lack of a written complaint."

Hoffman said the department is close to finishing final interviews associated with the alleged assault. In addition to assault, he said suspects could be charged with hate-related crimes.

It has been almost a month since that November 15th Norwich Bulletin report on the group of white men that allegedly beat up Nashawn Williams, a 10th grader, while he was waiting for his school bus. This followed on the heels of events where Williams had been taunted with racial slurs at school, of which the Superintendent at Nashawn's school confirmed in the report, and threats of violence to their family at their home.

Undercurrents has more on the situation and some things to do about this:

Connecticut legislators, Attorney General, Governor, State Police and on and on are SAYING NOTHING about the blatant racist attack against Nashawn Williams in Plainfield. The Plainfield police are simply dismissing the racist attack on Nashawn as a prank. Instead over the last week it has become glaringly clear that the victim and the family are becoming the targets of a Racist system of InJustice in Plainfield and Connecticut! I wonder if they were rich white folks in Plainfield if the deafening police and government silence would be the same? Don’t let Jena come to Plainfield! The System refuses to take a stand against Racism and so it is the PEOPLE’s VOICE THAT MUST BE HEARD. It is imperative that you add your voice and join us this Saturday, December 15th at the Plainfield Town Hall at 12:30 PM to stand behind Nashawn and his Family saying that we will not tolerate Racism in Connecticut.

"There are a few idiots with
big mouths running around,"
Hoffman said.
Correction there, Chief Hoffman. If you have already said that there may be charges of hate crimes, then there are likely a few VIOLENT idiotic BIGOTS running around... And almost two months later they are still running around.
Brewed by Connecticut Man1 at 12/11/2007 01:09:00 AM

Sarah Kraeger of Baltimore, a white girl, get beat by 9 blacks who give her multiple fx. no hate crime. no one stands up for her. No national news. Nashawn gets news, and the naacp.. He's lucky. He's also the exception. She's the norm. Last month 36 people died in detroit. 35 troops died in Iraq. I'd rather live in Iraq than Detroit, USA. That's kinda pathetic, don't ya think??
steve

It is safe to say their lives are irrelevant to you since you don't even consider them... That's kinda pathetic, don't ya think??