Is this brutal violence the kind of example the US is setting in Iraq?

A Houston, Texas woman says she was gang-raped by Halliburton/KBR coworkers in Baghdad, and the company and the U.S. government are covering up the incident. 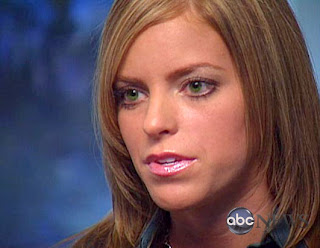 Jamie Leigh Jones, now 22, says that after she was raped by multiple men at a KBR camp in the Green Zone, the company put her under guard in a shipping container with a bed and warned her that if she left Iraq for medical treatment, she'd be out of a job.

Jones told ABCNews.com that an examination by Army doctors showed she had been raped "both vaginally and anally," but that the rape kit disappeared after it was handed over to KBR security officers.

Legal experts say Jones' alleged assailants will likely never face a judge and jury, due to an enormous loophole that has effectively left contractors in Iraq beyond the reach of United States law.

Hey... If she had been an Iraqi victim of something like this, likely, they would have just killed her and tossed in an alley somewhere afterwards instead of locking her up in a shipping container. Such are the ethics of contractors mercenaries in Iraq. And two years later we can clearly see how they remain unaccountable by the State Department and other government authorities under the criminal bush administration.

It isn't exactly like contractors mercenaries have a great track record in spreading bush's "Freedumb!"

And it is not like the military has been setting a great example for the contractors mercenaries, either:

As the anniversary of the Iraq invasion approaches, another milestone has quietly passed, leaving a window into the protracted and unimaginable human costs of this war in Iraq and here at home. A year ago, 14-year-old Abeer Qassim Al-Janabi was stalked, gang-raped, shot in the head and her corpse burned in her own home in Mahmoudiya, Iraq. Four U.S. soldiers and one former soldier are charged with the crimes.

The soldiers were so confident of their abilities to achieve their intended crimes that they rounded up the Al-Janabi family from their daily chores in broad daylight. Pfc. Stephen Green allegedly shot Abeer's parents and 5-year-old sister to death in the room next to where she was being raped by Sgt. Paul Cortez. His buddy, Pfc. James Barker held the struggling, crying teenager down while two other soldiers, Pfc. Jesse Spielman and Pfc. Bryan Howard, reportedly stood watch.

Such are the unpleasantries of invasion, war and occupation. The medical journal Lancet estimated in 2004 that at least 100,000 Iraqi civilians had been killed, more than half of them women and children. Today, in the absence of accurate figures, that number likely has been far surpassed. To Americans, far from Iraq, these are presented as the sanitized statistics of collateral damage. But the Al-Janabi rape and murders were too well documented to ignore, just as the souvenir photos taken by U.S. soldiers at Abu Ghraib prison forced Americans to see the torture being committed by their own troops.

[update] Just a minor clarification after re-reading this. I hope that no one took this in any way shape or form as belittling Jones’ situation: These guys that did this should have the book thrown at them if they are guilty. We will never know about that as long as they cover this up. But if Jones had been an Iraqi citizen? No doubt in my mind, she would be dead right now.
Brewed by Connecticut Man1 at 12/10/2007 04:10:00 PM