Cheney Flagged For Hanging With Racists

As we all watched New Orleans drown, was there ever any doubt about bush and cheney's views on race:

Although Cheney did not shoot anyone on this hunting excursion, the New York Daily News reports that the trip still managed to stir up problems for the Vice President:

Nobody got shot, but Vice President Cheney still fired up controversy Monday when he went hunting at a private club that hangs the Confederate flag.

A Daily News photographer captured the 3-by-5 foot Dixie flag affixed to a door in the garage of the Clove Valley Gun and Rod Club in upstate Union Vale, N.Y. 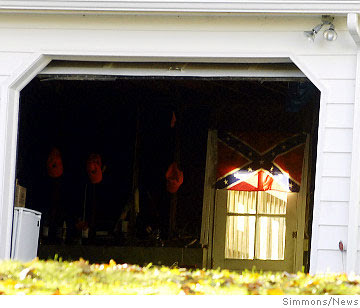 “It’s appalling for the VP to be at a private club displaying the flag of lynching, hate and murder,” said Rev. Al Sharpton. “It’s the epitome of an insult.”

Cheney spokeswoman Megan Mitchell said, “No one in our office was aware there was such a flag. The vice president did not see a flag, nor did anyone on his staff traveling with him in New York.” The Daily News photographer who took the picture, Howard Simmons, said “the flag was plainly viewable in the strong sunlight streaming toward the garage”, but he also “said it is conceivable the garage door could have been closed when the vice president and his guests were there.”

Sorry, but I am not buying that cheney would not have a clue about the kind of people he chooses to hang around with. Especially after NOLA, Jena, and immigration issues have exposed the hidden agendas of the average GOP supporter.

This is by no means a "Heads up!" I really mean "Duck and cover!" Like your life depends on it. 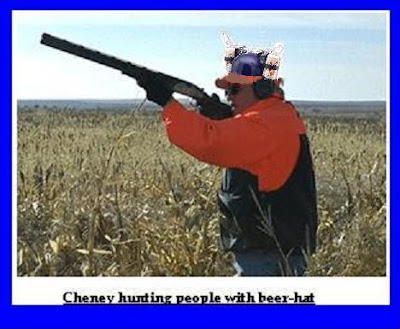 A word of warning to everyone in the area:

The Poughkeepsie Journal in New York reports that “Vice President Dick Cheney is coming to Dutchess County again to go hunting.” On Monday, Cheney is “expected to leave Poughkeepsie and head to the Clove Valley Rod & Gun Club.” No word on whether the Vice President will be drinking beforehand this time.

Dutchess County, NY, is next door to a good part of Litchfield County in Connecticut. And with the weapons that warmongering neoconservative idiot has in his arsenal we can never be too careful! There is nothing more dangerous than a hunter with a beer hat on his head and a deadly can opener in his hands...