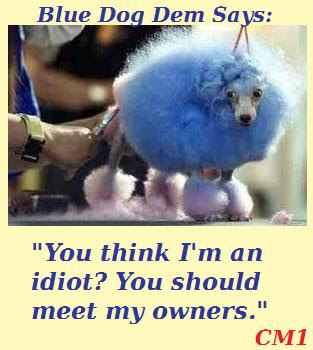 They were owned by the right wing and corporations and there is no big surprise why more than half of the Blue Dog caucus (28 of 54 members) were slaughtered in the 2010 elections.


So far, it looks like nearly half the Blue Dog Dems have been kicked out of office. That’s a much higher percentage of Dems than the Progressive Caucus lost tonight. I think it speaks loudly to why the Dems got their butts kicked today. This wasn’t Americans turning to the Republicans, which polls show Americans hate worse than Dems. This was Americans turning away from the Blue Dogs. The ones who sold us out to the corporatists.

This opens up some serious opportunities for progressives if we can capitalize on them two years from now. Without incumbency to aid them, the Dem Machine – which will be bringing more Blue Dogs to the table to replace the ones they lost – will have to win primaries against progressive alternatives in every Blue Dog seat.


Meanwhile in the Progressive Caucus?

Already the largest caucus in the Dem caucus, the Progressive Caucus lost only 4 members in the elections. And may even have gained a new one.

And the New Dems that had aligned with the idiocy of the Blue Dogs? They are decimated too:


Yesterday, in "Blue dogs decimated, blue dogs triumphant" I called attention to the Blue Dogs losing more than half their seats in Congress, and in "Fighting smart", I endorsed Big Tent Democrat's argument that progressives should start immediately "focus on Dem primaries for House seats."

And the resulting swing in makeup of the House, making the Progressive Caucus the new plurality:

Check his post out for a chart with a much finer level of detail.  But here's how Chris concluded:


Losing the House is painful, and will cause lots of problems for two years (or more). However, it does give us an opportunity to reshape the ideological composition of the House Democratic caucus in a positive way. Imagine if we can retake the House with the CPC maintaining this new plurality.

Clearly, the strategy Big Tent Democrat suggests would help us do precisely that.

Just so you know what BTD was talking about:

Progressives can be the change they are looking for. But they need to start now. And they need to focus on Dem primaries for House seats.

As Rahm Emanuel said, a crisis is a terrible thing to waste. Progressives should not waste this one.

In case you wanted the list of Blue Dogs that were crushed... Some Puppy Ciao furnished by Meteor Blades:


As for the departed Blue Dogs, we can do without their sabotage which did so much to deliver House Democrats into the minority. Only seven of the defeated 22 had served more than two terms in the House. Rep. Gene Taylor (MI-04), the longest serving defeated member, was first elected in 1988. So was John Tanner, who opted out of running this year. But 16 of them were first elected in 2006 or 2008. Here they all are, with the year they were first elected.

It seems like everybody on the left realizes the opportunity ahead of us all now that the Dems that had created some of the worst right wing policy and legislation have been crushed.

And we all know what we have to do... Get to work with an aim to run the primaries off of the map.

And there is a certain amount of humor in seeing a Tea Bagrrrr movement come to screeching halt in this Connecticut election.

And the biggest change Tea Party Inc. achieved? In other parts of the nation they made the lefts' job easier by helping to pick off the worst Democratic party members in the country while leaving the more reasonable politicians in office even stronger than they were before. And they have nearly completely destroyed the GOP while doing all of that for us.
Brewed by Connecticut Man1 at 11/05/2010 11:38:00 PM

Dems never learn. They wasted tons of outside money here in MD trying to get Democrat Kratovil reelected, even though his entire campaign was, "I voted against Obama on EVERYTHING." Hope he enjoys his last couple of months in office.

Hi,
I would like to thank you for the efforts you have made for this blog. I Really like this..
I have added your blog to My Blog Roll at
http://satellitesnews.blogspot.com/. So would
You put my blog too; our visitors can get relative and useful information form your site.
I will hope you would add my blog.
Thanks

I very much doubt progressives will make any gains in seats formerly held by blue dogs, and now republicans.

If the democrats' problem was not moving far enough to the left, they would not have lost so heavily last tuesday. I hardly think the electorate thinks the republicans are more progressive than the blue dogs.

Hi, Great post, I like this post. I 've added your blog to My Blog Roll at http://josephletzelternews.blogspot.com/ So would you put my blog too, on you... you can get healthy traffic from us and our visitors can get relative and useful information form your site. Hope you would add my blog. Thanks a lot.Keep blogging....

FreeRepublik: Yes.... McMahon's 40 to 45 million bucks to be slaughtered and the Chambers untold millions of outside money (some of it so outside it is foreign money) into campaigns across the state of Connecticut was a colossal waste of money too.

daniel noe: The blue dogs slaughtered were mostly from what are typically considered red districts. Not purple ones. And the fact remains that the Blue Dogs and the New Dems helped the republicans hold the most popular progressive legislation ideas hostage, like the public option, so nobody ever had a chance to pass progressive/liberal legislation. So your argument makes no sense.

Too bad about losing control of the House though.

@connecticut: Whether they were from purple or red districts makes no difference. My point was that they might not be from blue districts.

My argument might be flat-out wrong (I don't have the data), but it still makes sense.

Their biggest problem in the districts lost was the fact that they ran "republican-lite" candidates. Given a real choice in candidates - as opposed to a choice between a conservative and an uber conservative - voters might actually pick a left leaning candidate that would vote in their economic interests and less for the Corporate personhoods' interests.