For those of you that just don't get what single payer healthcare is all about, via Karoli at US Health Crisis, real Canadians talk about healthcare:

Why this video? Why now?

In the spirit of truth, my friend Matte Black (@Shoq on Twitter) and his brother took their video camera to Canada on vacation to interview Canadians about their health care system. When we talked about it, I asked him to try to get negative views with specifics for balance. Here is the result. It has been edited for brevity, but the negative views were not removed, because there were none. He could not find one Canadian who thought they should kill the system. These are everyday people. They have no agenda at all other than being patriotic Canadians.

Please watch it and share it with as many people as you can.

I get a kick out of the responses to the co-pay question: "Co-pay? What does co-pay mean?" This is exactly what happens when the people demand a healthcare system that works for the people instead of for the bottom line of a corporation.

I lived in Canada for about 28 years.


I can't begin to list how much better everything is in Canada compared to the health care disaster we all suffer from south of the border. Cradle to grave, there is never any question about whether they will do everything they can to treat you in a reasonable amount of time.

I could walk in to my primary care physician any time he was open. If it was his golf day or something like his vacation time? I would go a couple of blocks down the street to another doctor. I chose those doctors based on my level of comfort with them.

My primary would even do house calls (probably still does?) if you or your kid were too sick to make it in.

If you had something so severe as to need more than what your typical primary could provide? Walk into the emergency room (or take the ambulance - they don't ask if you have insurance first because that would be inhumane). It is my understanding that they now have CLSCs in Quebec to cover the less severe emergencies like breaks, sprains, stitches, etc., that might just need the basics or to use when your primary caregivers office might be closed. This alleviates pressure on emergency rooms at hospitals so they can concentrate more on the serious emergencies.


My father was diagnosed with cancer not too long ago and given about six months to live.


He was treated by the best medical staff he could find for his specific problems. He also had a good backup for second opinions. He chose them based on how he wanted and needed to be treated based on consultations with many caregivers. He lived 3 more years after that original dead end diagnosis and died in his 70s.

No healthcare or treatment is perfect but had he lived in the USA he very likely would have been uninsured because of previously existing health conditions. In the USA he wouldn't have even had that "six months" diagnosis.

And never, not even once, did he have to make any healthcare decisions based on whether or not he could afford the treatment. He decided (as do all Canadians) in conjunction with and on the advice of his doctors. There was no insurance company in between them to turn him down.


The American system is as cruel to the poor and those that really need the medical help as it is profitable to the insurance companies.


Those are just some of the things I can say about the Canadian system.

Americans, in surveys, appear to be "more satisfied" with their healthcare providers than Canadians do. Maybe you don't understand this, being that you have had a crappy healthcare system all of your life...


That is because Canadians expect a lot more from their healthcare system than Americans do.


Never mind that the polls I have seen always point to satisfaction with providers BUT rarely address the cost and the mode of payment directly. Why? Because the few times we hear the voice of the people on this, for the most part, they say they hate their medical insurance companies.

My primary doctor in the US is great. He supports Single Payer. Most of the hospital people I have dealt with are great at their jobs, too. I always ask them and they support single payer by a large margin. My children have a great pediatrician and, yes, he supports single payer as well. Nothing to complain about the actual service providers. That side is pretty much equal to the Canadian providers. Some are better and some are worse, but competent and caring nonetheless. They want to give you the best service possible. And, for the most part, the majority of those providers want to give you single payer.

I am among the few that has half decent insurance. For how long, who knows? In this economy corporations are stripping workers of higher quality insurance for less costly junk plans. Our family's plan was changed to add higher co-pays and more restrictions on usage AGAIN, this year. And that is if these cash strapped corporations and small businesses aren't laying people off people all together so they have no insurance at all. If our family lost our source of health insurance we know that our budget would eliminate any possibility of keeping coverage regardless of government's provision of the costly Cobra plans. On unemployment, we would struggling to keep a roof over our heads and the kids fed. Regardless of that, I expect more from my healthcare AND I expect it to cost a hell of a lot less. But that is because I have seen and lived with a better healthcare system than the one we have here.


I expect nothing less than Single Payer!


Of course, that does not mean I am completely rigid on this and unwilling to compromise. It is just a higher standard that could be attained in this country. More recently we have seen a lot of discussion on the public option, since single payer has been banned from the political discussion and the media's coverage of healthcare.

Most recently some morons are saying that is the "Left of the Left" that are pushing for the public option and this supposed to be shocking news to be breathlessly reported on in the traditional media... As they continue their twisted and contorted takes on reality, let us look at who really supports the public option, OK?

67% of conservatives support having the choice between a public option and private insurance.


71% of Republicans support having the choice between a public option and private insurance.


77% of Americans support having the choice between a public option and private insurance.

For those politicians and media stenographers that have a problem with reading comprehension I took a moment to annotate this Survey USA graphic. There is your "Left of the Left" in RED and BLUE... 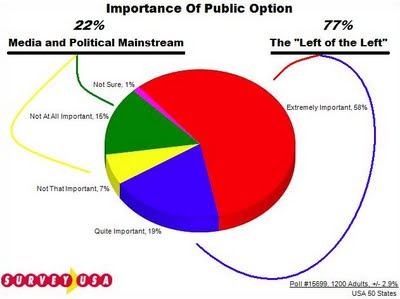 The black ink in the ledgers of insurance corporations is being balanced by the red blood of Americans.


Right now about 22,000 Americans die every year because they are under or uninsured. This has got to stop. Now... You could do nothing at all about this issue OR you could contact your Congress critters and hammer them to bring some semblance of real reform to healthcare. Americans are literally dying waiting for something to be done. And a public option, at the very least, will allow for the uninsured to get insurance and give the underinsured the opportunity to choose better insurance.

Now... As a final thought, some healthcare experts from Canada:

Apparently Obama has been pushed into abandoning even the Public Option.

Where is Tommy Douglas when we need him the most?

I am not sweating what Obama is going to do until after he meets with the AFL-CIO on the 7th. We should get a good idea of where he is going from there. I can't see him even bothering to go there and meet them just to say "no public option" because they will chase him out of there and, likely, out of office along with the blue dogs.

I can't see him even bothering to go there and meet them just to say "no public option" because they will chase him out of there and, likely, out of office along with the blue dogs.