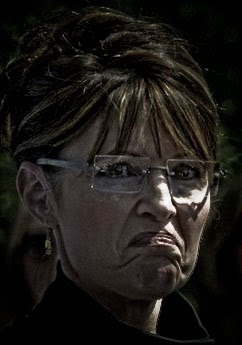 Personally, I'd love to see those Democrats who think it's a good idea to appear with Palin.

It would make it that much easier for us to weed them out.

Like herpes, we appear to be doomed to have to endure outbreaks of the Tundra Tart forever. Where do I get Caribou Barbie ointment?

Here are the keyords in the essay:

We approach the future walking backwards, our gaze forever fixated on the past. Predicting the future is not a passive exercise; we invent it every day with our actions.

I began the sketches for what would ultimately become Obama 2012 in March 2007, a month after Barack Obama declared his candidacy. I had spent much of the previous 18 months living abroad as an entrepreneur and statesman of sorts, and I was slightly out of touch with the pulse of life on the street in the United States. I learnt about Sen. Barack Obama’s Springfield, IL speech formally declaring his candidacy for president of the United States through one of the international cable news channels and thought how great it would be to have a fresh start after years of mediocrity in Washington and a plummeting reputation around the world.

By September, after what seemed like raising a six-month-old child, my sketches had turned into Why the Democrats Will Win in 2008 the Road to an Obama White House. It was my answer to the burning question everyone had back in March: Can he really win? Actually, not everyone thought it was a question. For many people, including Mark Penn, director of the Clinton campaign, the answer was an easy “no way.” This strategic blunder made it that much easier for the Clinton campaign to be defeated. Then there were Black pundits like Shelby Steele, a fellow at the Hoover Institution, who came out with a 2007 book entitled A Bound Man, Why Obama Can't Win.

Being Black did seem to be an automatic disqualification, but then why did someone need to write an entire book arguing what should have been patently obvious? Joint Chiefs of Staff Gen. Colin Powell came to my mind and I remembered that he could have run for president in 1992 as a war hero. But Colin Powell was Ronald Reagan’s protégé and got a special pass on the race question. Black conservatives like Justice Thomas, Condoleezza Rice and Colin Powell were careful to disassociate themselves from liberal thinkers and activists like Jesse Jackson, who lost, as expected, the 1984 and 1988 Democratic primaries. Ultimately, Colin Powell, in spite of all his honors, declined to run for president. His wife Alma feared for his safety. Common sense said that a candidate like Obama, for numerous insurmountable reasons, didn't stand a chance of winning the Democratic primary, let alone a general election in which 10% of the electorate is African American and Republicans controlled the White House for 20 of the preceding 28 years. But I decided that Obama's chances merited a closer examination. In it, I would bring to bear my gambling skills.