The Courage Of the Vermont Congress

Many of us that support Marriage Equality didn't think they would have the votes to accomplish this... 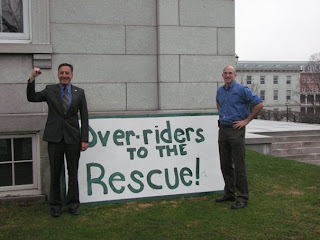 Moments ago, the Vermont House voted 100-49 to override the marriage bill veto! The House vote, which followed the Senate voting 23-5 this morning to override Gov. Douglas’s veto, means that Vermont becomes the first state to OK marriage equality through the legislative process.

Vermont has now recognized the same Marriage Equality that Massachusetts, Connecticut and Iowa have already recognized.

[update] The NY Times explains why this is a bit of a surprise:

Approval had been expected in the Senate, where the vote was 23 to 5.

But the outcome in the House of Representatives was not clear until the final moments of a long roll call, when Rep. Jeff Young, a Democrat who voted against the bill last week, reversed his position. In the end the vote was 100 to 49, just slightly more than the required two-thirds majority of members present.

And my daughter Kate, after listening for about 20 minutes, said to them: You guys don't understand. You've already lost. My generation doesn't care.

I think I learned something from my daughter that day, when she said that. And I've talked with other people about it and that's what I see, Senator McKinley. I see a bunch of people that merely want to profess their love for each other, and want state law to recognize that.

No, Senator McKinley, I will not co-sponsor a leadership bill with you.

Good day for equal rights. Daughters and sons of miscegenation legal arguments past can cry me a river.