If John McCain's campaign is afraid of Obama signs, how can we expect their sorry criminal asses to deal with terrorists?

About a month ago I put an Obama campaign sign at the end of my driveway. I live in Connecticut, so I didn't expect anything to come of this. But, my sign disappeared after about a week. So, I went online, and I ordered 5 more. You know, to prepare for more disappearances and to qualify for the first quantity discount tier.

Feeling bold, I put two signs at the end of my driveway. A week later, they were gone as well. That was last Friday (before Labor Day). I was angry enough to report it to the police. They took my information, and were very professional. They treated me as if my complaint was legit - not just being an annoyance to them. I mean, I don't expect them to recover my stolen property, nor do I expect them to find the culprit(s) really. But I wanted it on record that this had happened, and I didn't like it. After the officer left, I put up a new sign (just one this time).

This morning, I saw this scene at the end of my driveway: 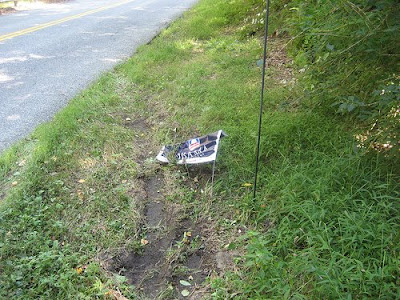 Don't these people realize that all they are accomplishing by doing this is forcing me to give the Obama campaign more money to send me more signs???

While the Connecticut GOP backers of John McCain are too busy peeing their pants over yard signs and vandalizing other Nutmeggers property using old style plays taken from the Karl Rove book on the dirty tricks school of politics...

Obama supporters from the Democratic party, and unaffiliated little "i" indies like myself are too busy working for real change to play these CT GOPers childish games.

The fact that the Republican party has absolutely nothing to offer anyone in Connecticut is scaring the crap out of their supporters. Joe Biden nailed it when he talked about the craptacular mass of mediocre quips as distractions that the GOP has resorted to in order to avoid the real problems that the incompetent GOP has created: