Time to Label a Traitor...

Karl Rove approached Time magazine for a job. Time, however, rejected Rove as “essentially like an unindicted coconspirator in a whole host of felonies”:

Time’s editors apparently felt the cost/benefit analysis wouldn’t be in their favor if they embraced the man who has done more than anyone to keep the spirit of Joe McCarthy alive and well in American politics. … “They think Karl is essentially like an unindicted coconspirator in a whole string of felonies.”

These lying sacks of treason from the unindicted Libby files deserve no better reference than that. Here is the traitor Rove plotting and scheming with one of his other traitorous GOP buddies: 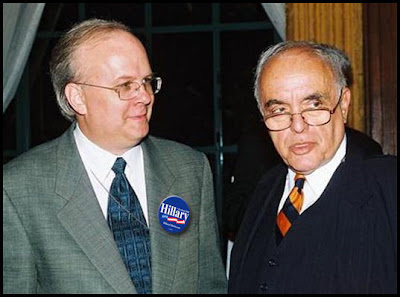 Via Steve Benen at TPM:

If you're just joining us, Novak reported yesterday that Hillary Clinton's "agents" are gossiping in Democratic circles that the Clinton campaign has "scandalous information" about Obama, which they reportedly will not share.

Of course, as a matter of journalism and professional standards, Novak's piece was a textbook case of media irresponsibility. His column shouldn't have even run -- Clinton supporters (who he will not name) are allegedly spreading rumors about rumors (which he cannot identify) addressing an Obama scandal (which may or may not exist). Joe Klein suggested that Novak may have "simply abandoned all pretense of being a journalist."

What's most striking, however, is the full-scale war between the Clinton and Obama camps in the wake of the piece. Mark Halperin has a timeline of events, which is both lengthy and painful.

A few observations. First, Novak's column smeared both Clinton and Obama, and the two campaigns proceeded to make it worse by spending the entire day bickering over what was, as a practical matter, a dumb column devoid of any substance.

*
The idea that someone could slander the lizard queen is laughable.

If there is something bad enough to say about this evil witch I haven't though it yet or I would have said it myself.

I understand Hillary's electability problems, but only based on her positions on issues. Not because of name calling slanders and mis-characterizations built by the GOP echo chamber. That is laughable.

And that has little to do with the recent dysfunctional actions of the Democratic party.