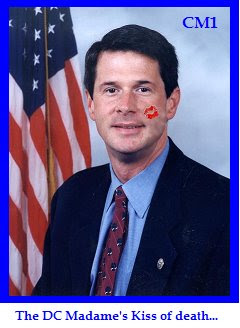 Another Republican gets caught up in the DC Madam's sheets as he turns up on her sheets of papers with all of those phone numbers, according to cookie jill at skippy's Blog:

Sen. David Vitter, R-La., apologized Monday night for "a very serious sin in my past" after his telephone number appeared among those associated with an escort service operated by the so-called "D.C. Madam."

..."several years ago, i asked for and received forgiveness from god and my wife in confession and marriage counseling. out of respect for my family, i will keep my discussion of the matter there — with god and them."

TPM has updates on this:

Late Update: Headlines that suddenly might be seen in a different light. From 2004: "Congressman Denies Affair With Prostitute, Says Charges Are Politically Motivated" I'll bet.

Later Update: Talked a big game on defending the sanctity of 'traditional' marriage.

[update] This may give some of Louisiana's left a little more breathing room:

The Washington Post published a requiem to Tom Delay and his corrupt PACs (Political Action Committees) today, and anyone who is interested in the structure, goals and foundation of Vitter's PAC, which will donate at least $2.5 million to Republicans running for state legislative seats, should read it in full. For the parallels are eery and telling. And if Vitter and his PAC attain their goal of stacking the state legislative bodies with radical conservatives who will impose destructive, extremist agendas and an unfair redistricting plan on the people of Louisiana, just as Tom DeLay's appointed thugs did in Texas, only to have the courts rule their actions unconstitutional, we can expect at least four years of overly partisan and shamelessly corrupt DC and Texas style politics in Baton Rouge.


Looks like Vitter won't be in a position to do much of anything other than try and save his own political hide for now...

[update deux] I tried accessing the list last night to search it, but the servers that had it were crashing from traffic 'cause I was getting error messages and weird stuff.

Here's the link to the site that had it. It is still showing errors now.

As a side note: Skippy is 5 Years old today? That kind of means your links are greying a bit in Bloggers years... Geting better with age, for certain! But don't ya think 2 million hits is aiming low for a Blog like yours? :)

Only if they were real good. Then I sure he just tried to save their souls from sin.

If he saved their souls, can he right it off as a charitable donation on his taxes?